28 Years of Deer Hunting at the Tyson – O’Ferrall

Brother in-laws Steve Sanguinetti Sr. and Bill Mangini introduced their sons to hunting at an early age.  As young boys their sons savored the opportunity to make the trek to the Tyson – O’Ferrall ranch to hunt with their Dads.

Steve Sanguinetti Jr., John Mangini, Vince Sanguinetti harvested their first deer together in 1984 that is shown in the picture below.  Like many hunters the cousins have caught “buck fever” and have continued to hunt together over the years.  The second picture is the trio with a beautiful 4x4 buck taken in 2012.  The exact spot where the boys hunt remains a secret but if you look closely at the two pictures you’ll see that the cousins have a favorite log they like to sit on for pictures.  Funny thing about that log though. While it’s stayed in the same spot it seems to be shrinking in comparison to the hunters? 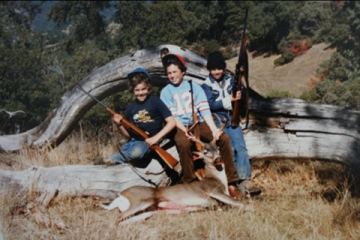 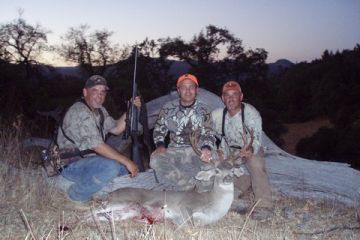